I have one rule for arrival day – never ever make a non-essential purchase, unless you are under the influence of a very strong currency or a very short itinerary.  I was under neither, which is to say I was well over my head buying 2 silk kaftans and a massage just minutes after my first ATM withdrawal in Mamallapurum. It’s not like the kaftans were off the rack either. I chose the material and had them made. That a whole lot of time and reasoning you can’t explain away with jet lag. There are closets around the world filled with countless tasteless or overpriced “first 24 hour” purchases. Usually clothing in colours we would never wear (pastels?) styles we still hope will come back into mainstream fashion (tie dye anyone?). We hide these items at the back of the cupboard along with our guilt and credit card receipts. A plague of tuk tuks be on our houses. 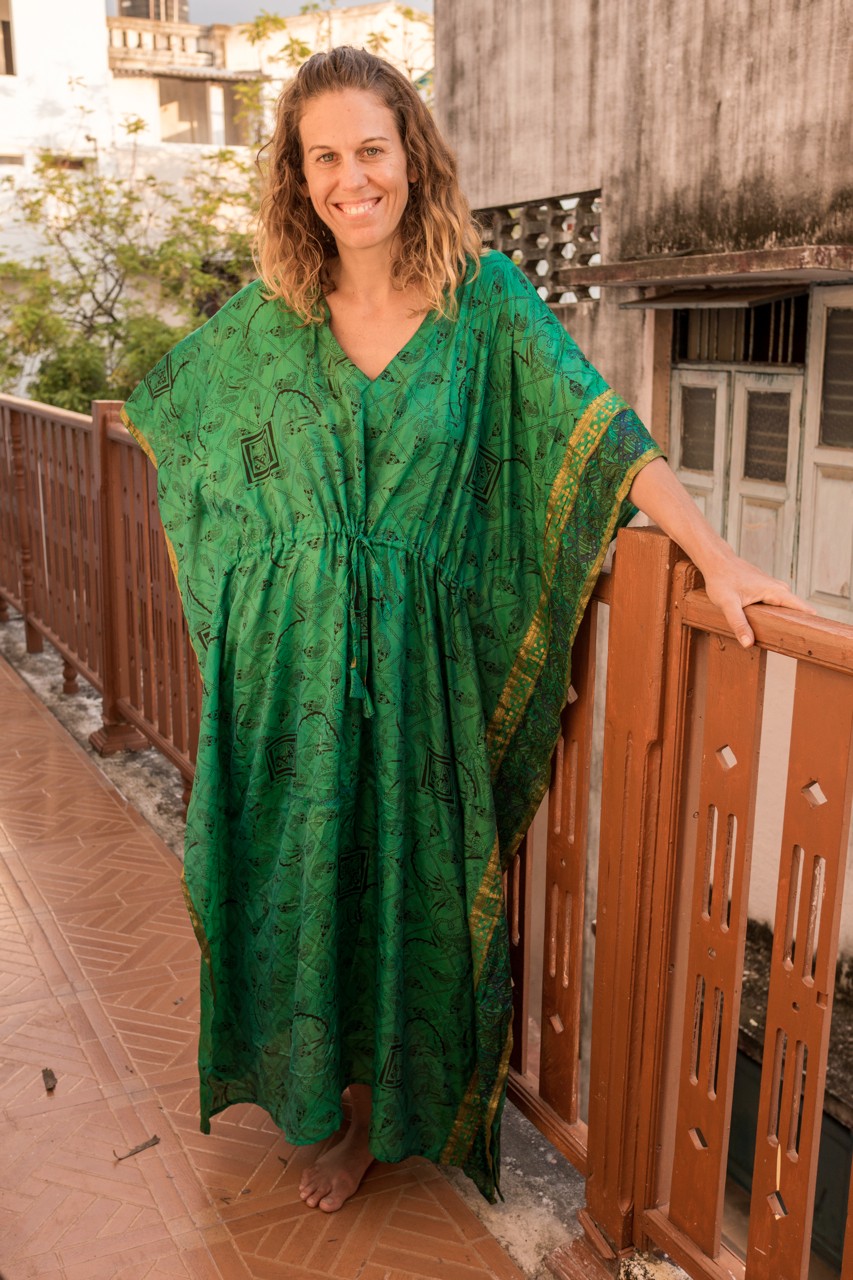 I also happen to think that the first 24 hours is very important to any journey. They set the scene and theme for the whole trip ahead. Mine was well, read on… 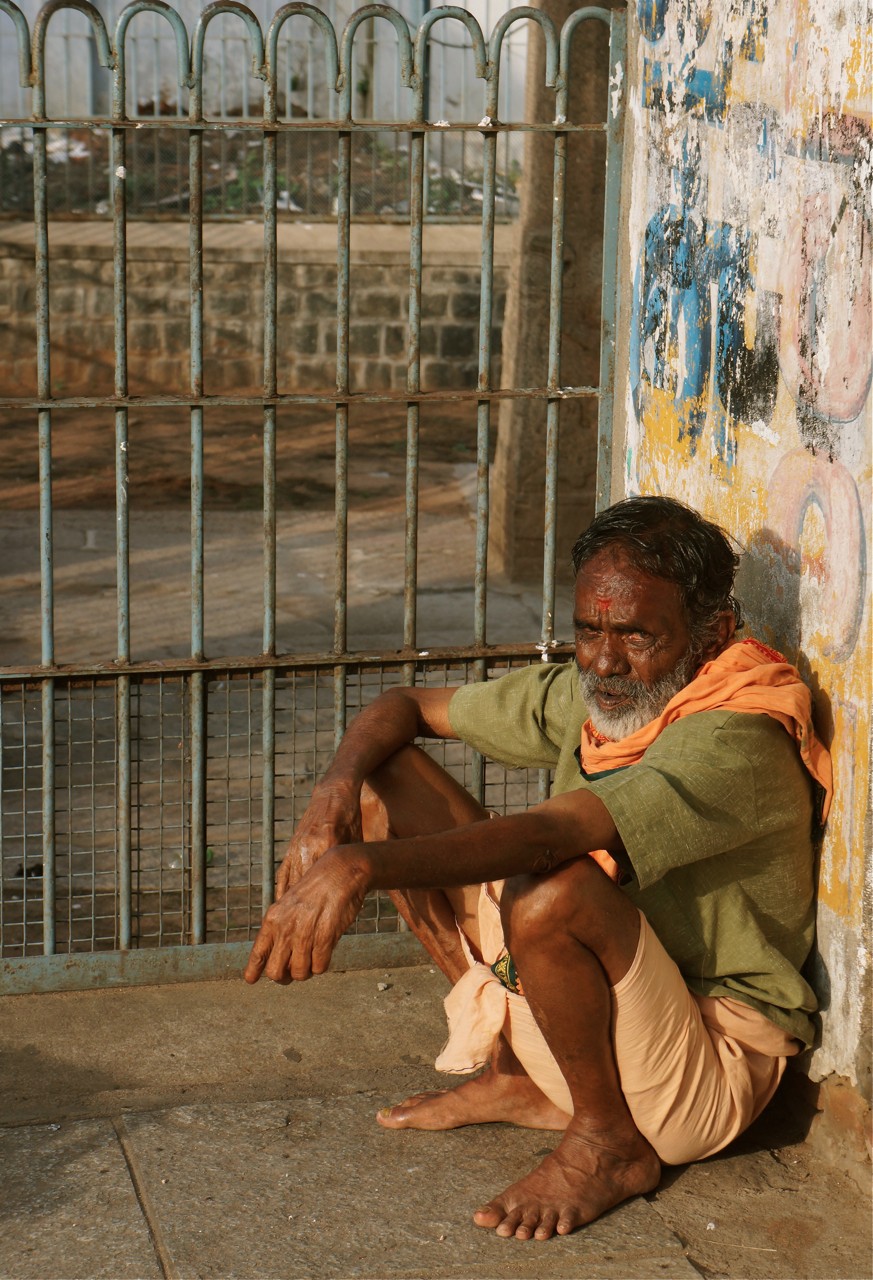 Pic: On the streets in Mamallapuram, Tamil Nadu

Exit Arrivals Hall. 8.30pm. 25 degrees: I was greeted with India’s intrepid entrepreneurial spirit off the bat. The man at the fixed price taxi station (okay tolls included) turned out to offer under-his-breath but still over the counter foreign exchange as well. “good price no commission”.

Our bags were swiftly seconded by another entrepreneur, in orange, who would carriage them safely to the taxi 1 minute away. I bet he does great business off foreigners who don’t have any small change or clue as to the currency just yet. He got $1 off me. Not a bad 5 minutes work.

Enter taxi 28 degrees. We opted for the R100 cheaper “Non AC” option, which means we got the “windows down” introduction to India – heat, hooting, and the smell of shit, rubbish and fruit breaking down into their most olfactory elements. I call the India “the rotting and ripening of life”, a place where life and ideas are coming to fruition or in various stages of decay.

Our taxi had a different take on family business. The father came along for the ride, but thought nothing of asking for a tip, along with his driving son, who we did furnish with 100 rupees. He did teach us the Tamil word for “Thank You” (sounds like Nandri), which he probably regretted when I offered this greeting to him instead of a tip.

The next entrepreneur to prey on our blood was the noisiest and most dogged of them all –mosquito. He could find a loophole of even the sturdiest netting; blood through the toughest travellers skin. Luckily for him/them/their army of recruits, we were soft and moist and not covered with much for the heat in our rickety fan room. Sleep did find us. But then so did the local dog and his bark.

Dog bark. On repeat. In falsetto. 2am (roughly).

We didn’t want to mess with breakfast. So we chose western and went with a name we had heard mentioned on the wind. (Obviously the South Easter, because we clearly got that one wrong.)

We weren’t the only ones in the restaurant. A whole family of flies pulled in as we sat down to eat our liquid banana porridge, served with a side bowl of hot milk just in case. No one seemed bothered. They were watching the cricket. Clearly the South Africans was losing this game. 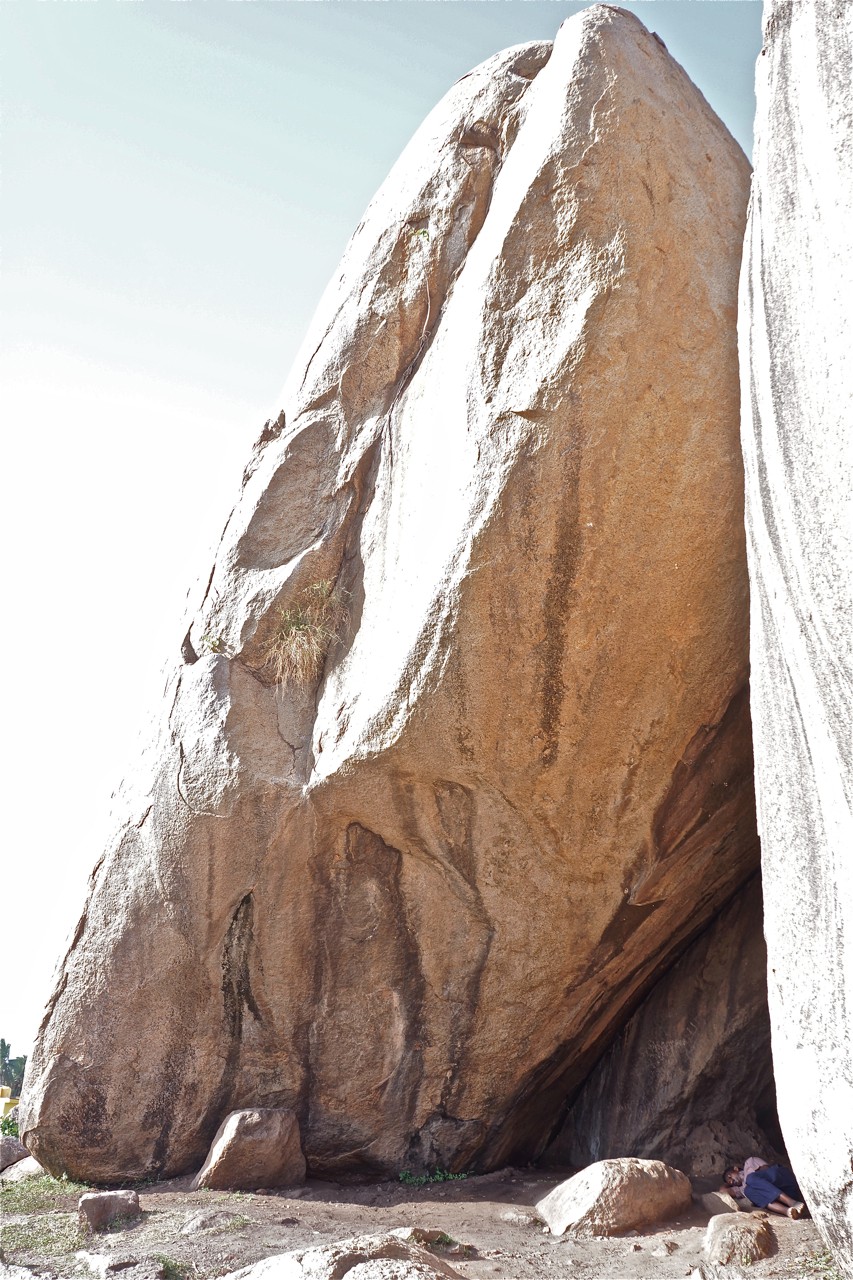 A local canteen lunch satisfied my hunger for a good thali (set meal) and appetite for the cheaper things in life. We took our Buddha bellies onto the road and did a walk through the Unesco World Heritage site that encompasses some impressive boulders (Krishna’s butter ball) and stone carved caves like Varaha Cave, which has four impressive carvings of Vishnu, Gakalakshmi, Trivikama and Durga. 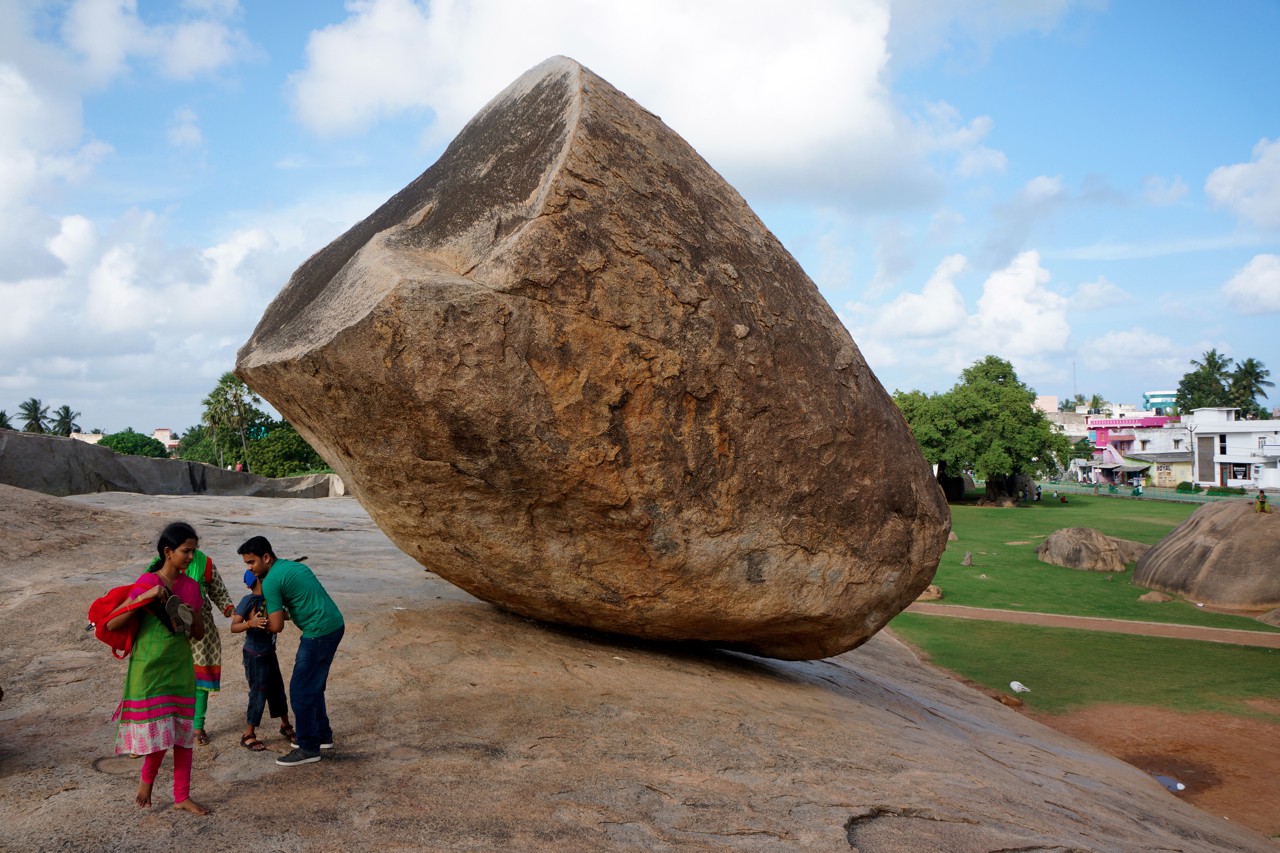 We had a chat over tea with a local Chai Wallah (tea server). The light was too good not to photograph the hell out of his tea making. We were the parasites now, sucking him dry for local information and stories. He had been living for three years in Kuwait, putting up awnings. Not a life for him, he said. He missed his family. 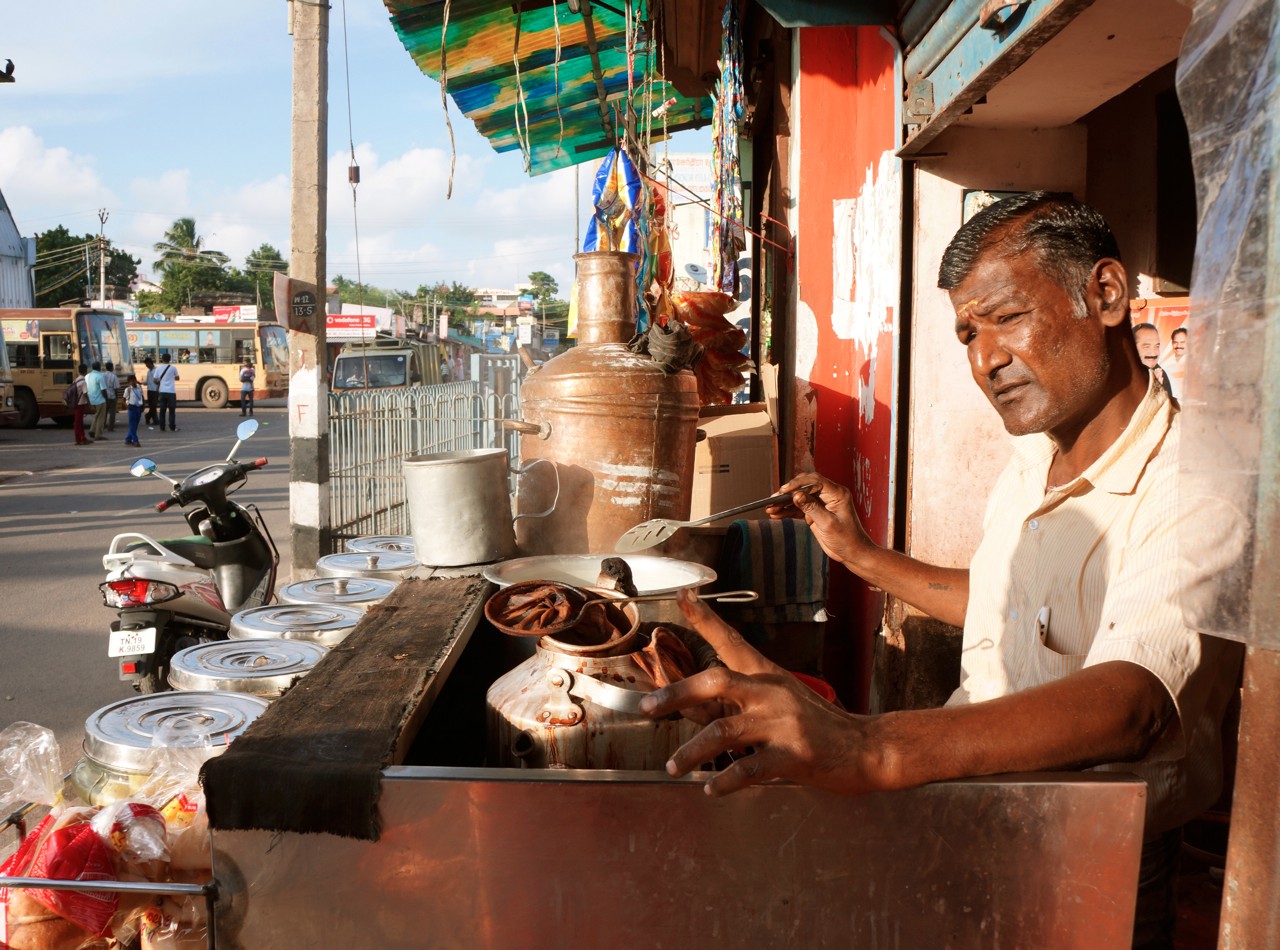 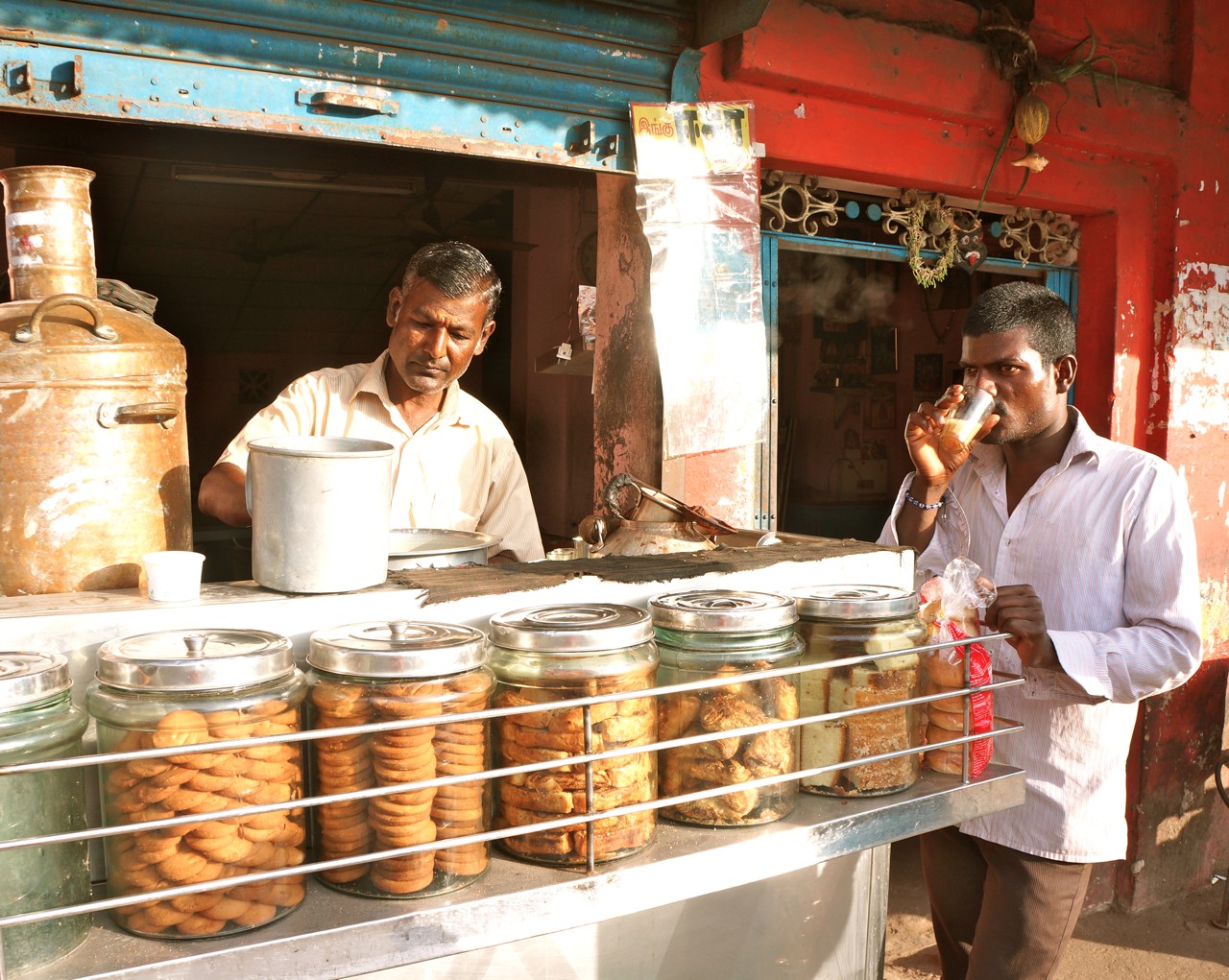 We must have stumbled on the Silk Route home. There is no other explanation for ordering two silk kaftans and considering another one for the morning. And this was before we met Ben and his smooth dragging herbs, back at our hotel. 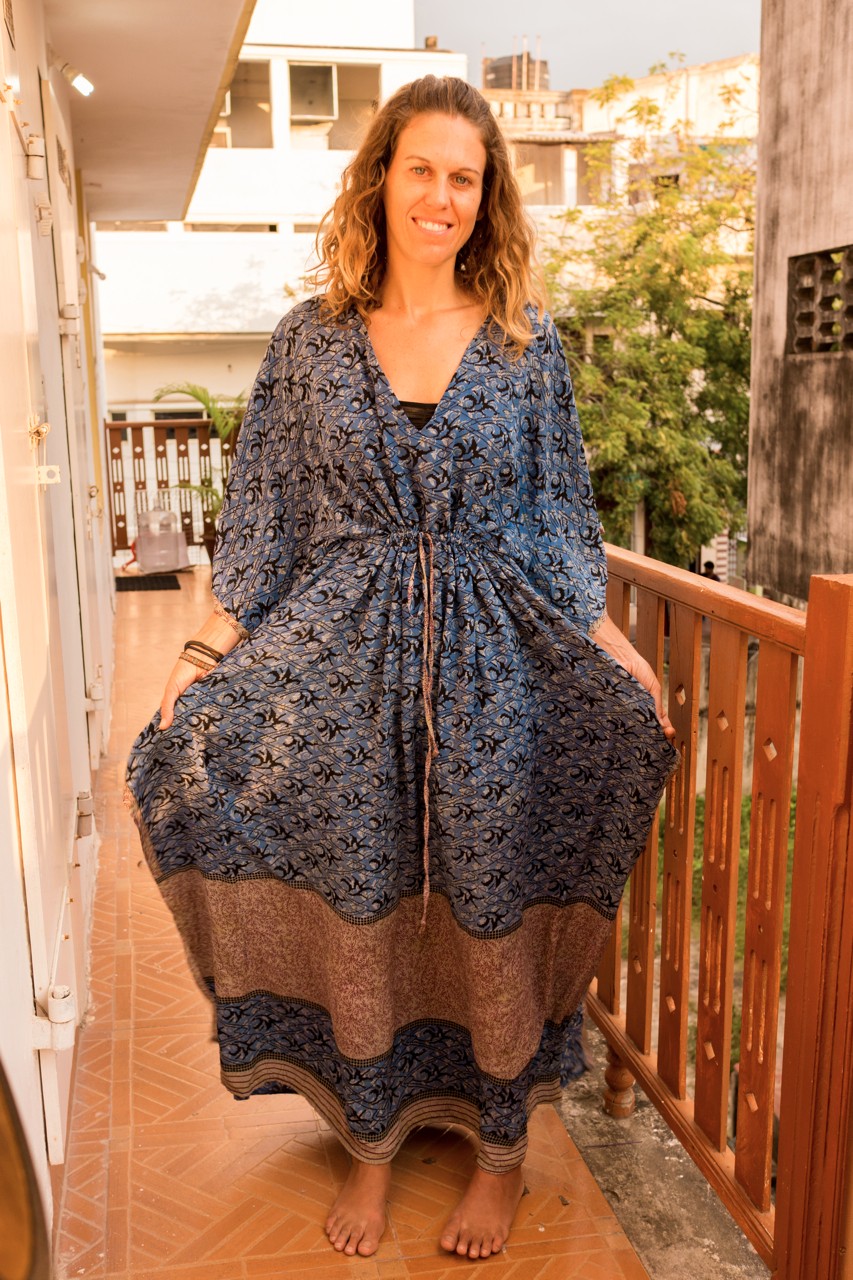 But Ben was no slacker. He’s a young Chennai local who just decided to channel his IT degree and English knowledge into skills that will one day profit the youth and unemployed adults he now mentors in Mamallapuram.

Pity Ben didn’t share his local knowledge with us when we followed him to his friend’s restaurant bar down the drag. He could have warned us not to get too excited about fresh fish curry made from the local Snapper varietal. That be one bony delicate fish. After fine minutes, Garth and I were comparing bone collections like we were on some sort of archaeological dig. He would see my spine column and then raise me a plastic bone that looked like a guitar pick.

And so we ended the night as we began the day, with red eyes and raspy throats, but this time with no more bones to pick. We laughed our way home and fell asleep only to wake to the beautiful smell and sounds of torrential rain.

It’s going to be quite a trip.

Pic: On the streets near the bus station in Mamallapuram, Tamil Nadu 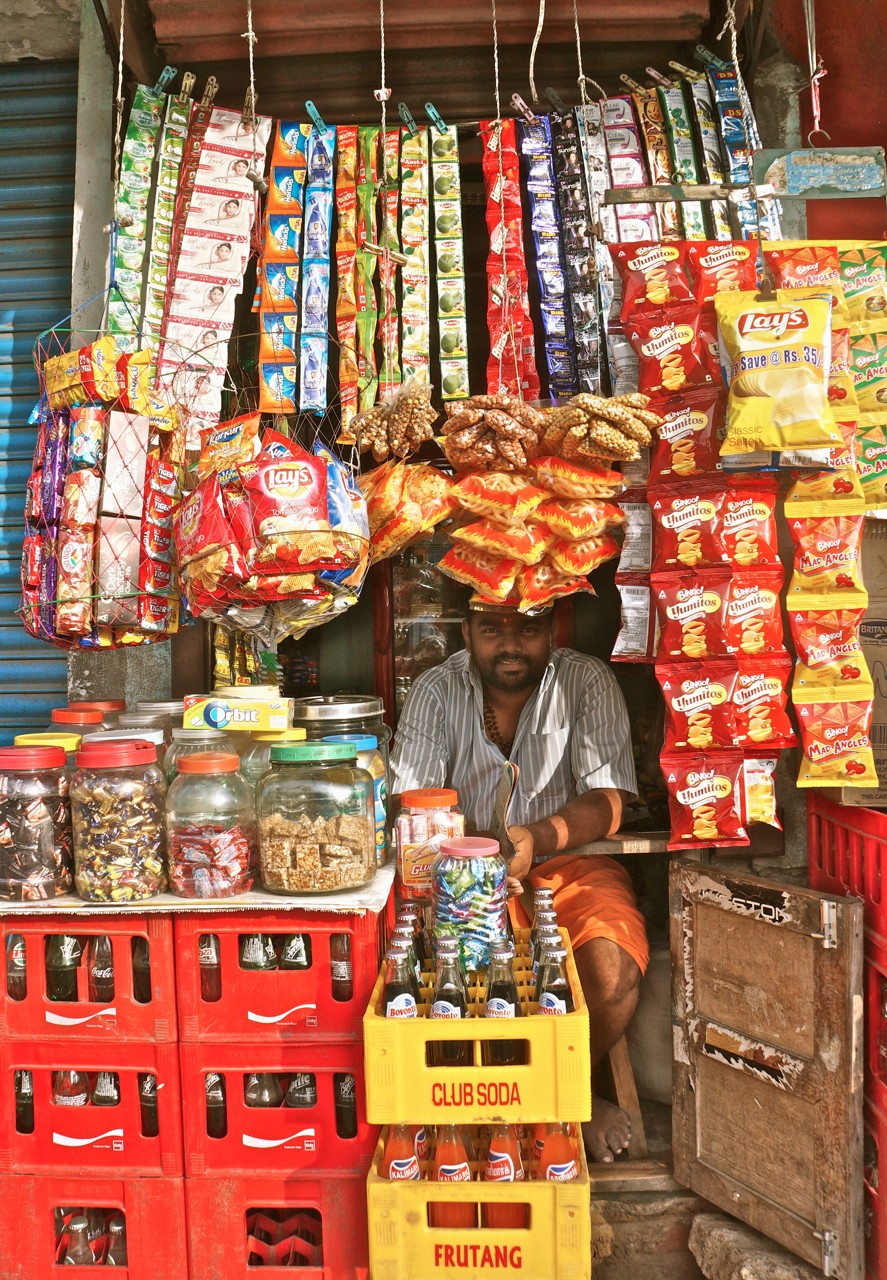