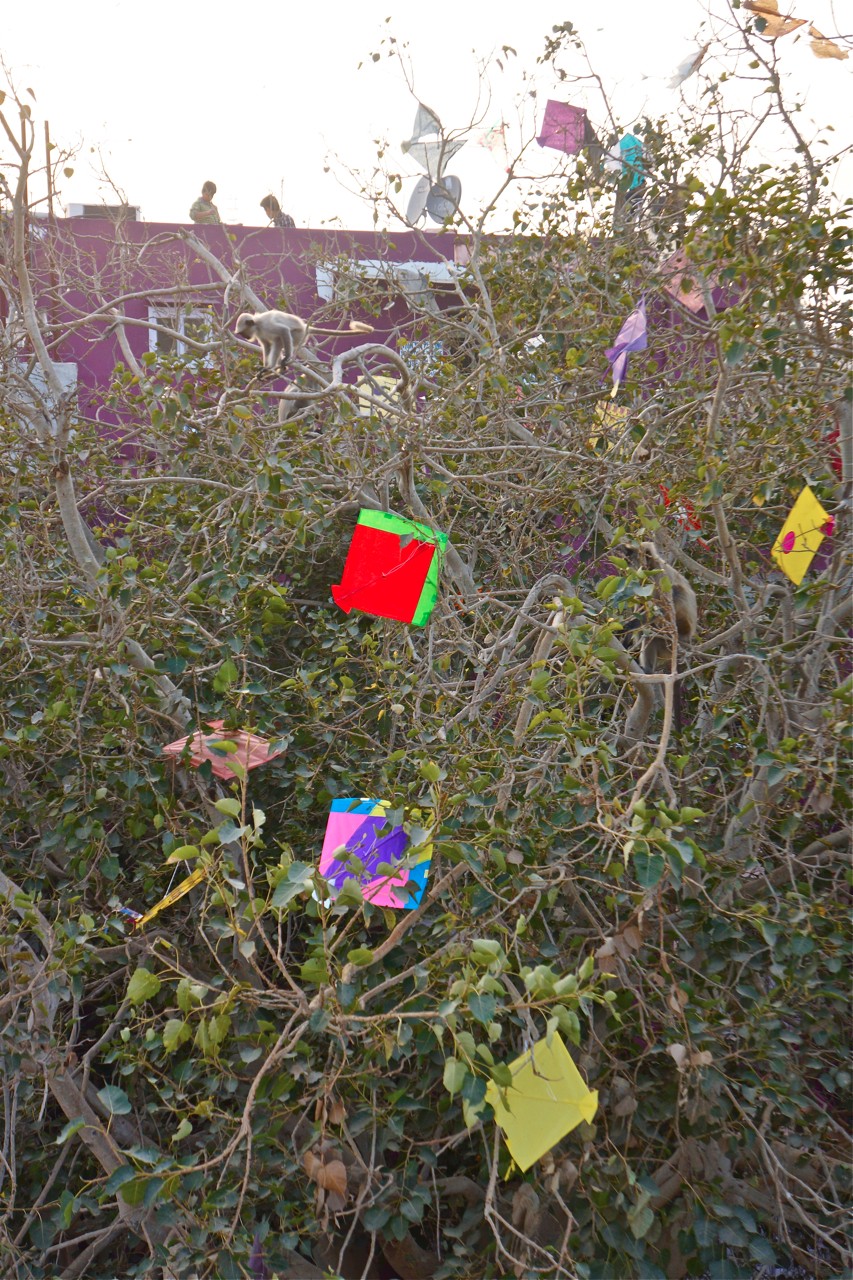 It must be an odd sight for an outsider. Arriving in Pushkar on the morning of 15 January, seeing trees decorated with bright paper squares, visiting the holy lake drowning in the same whimsical decorations. What would the visitors think when bunches of threads tangled around their shoes and tripped up their ankles? Even the hundreds of pigeons and handful of ducks that watch over the lake from the surrounding steps look confused by the new additions.

Had these travellers arrived one day earlier, on the day of Uttarayan, they would have been equally bemused by the sight of thousands of adults and children, of all castes and classes, standing high on the city rooftops, tugging at invisible connecting their focus to a small piece of property in the sky. 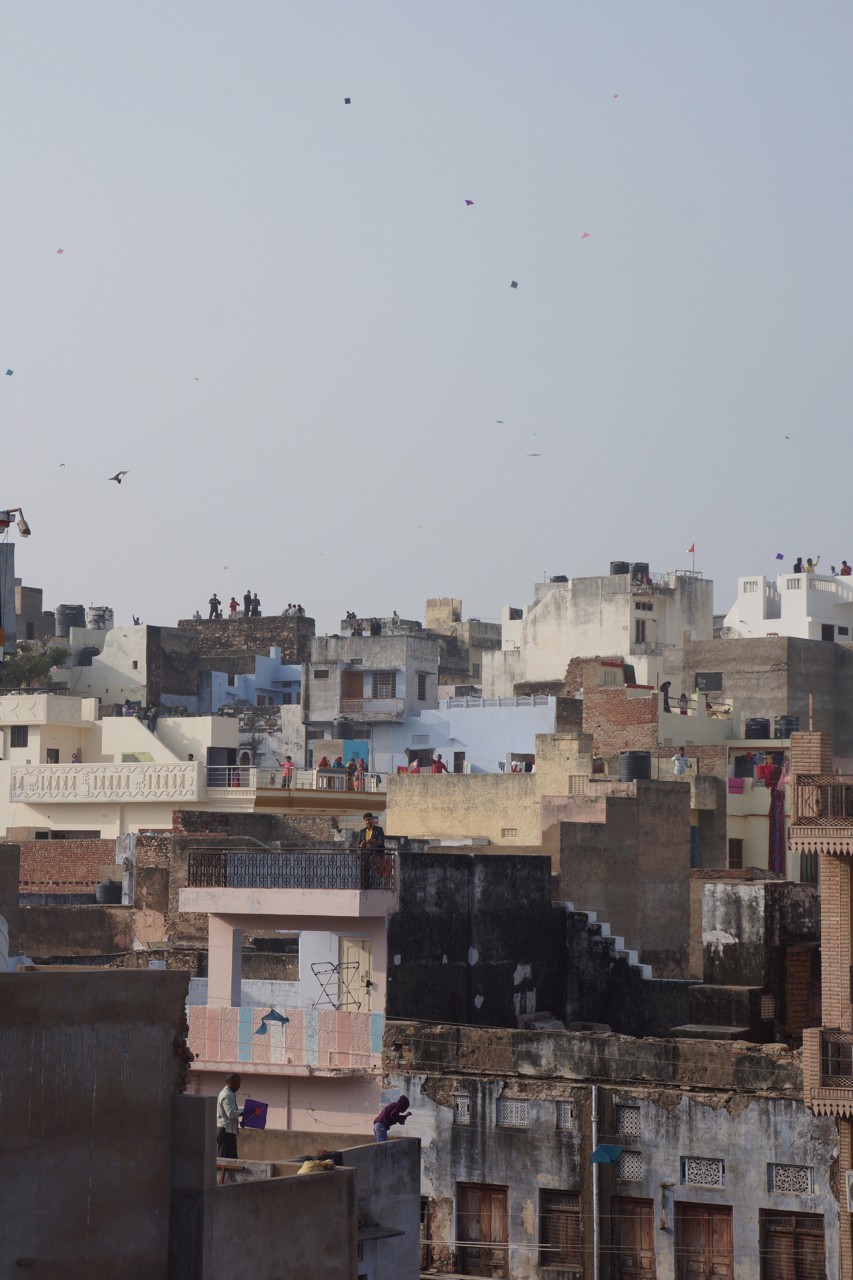 But then most travellers are used to India making lots of festivals and not much sense. In fact, we camera-bearing folk welcome these days, sometimes weeks, because, unlike western festivals, the Indian counterparts are usually colourful, playful and are enjoyed out in the open, on the streets and rooftops for everyone to observe and enjoy. And there is usually good food to accompany the festivities, often free.

If you ask locals why the Kite Festival takes place on 14 January, they will probably seem confused by the question. It takes place on that day every year so why question it. Not many will tell you what Wikipedia does: that it is celebrated on Uttarayan, which marks the day when winter begins to turn into summer according to the Indian calendar and is thus a sign for farmers that the harvest season (Makar Sankranti) is approaching. 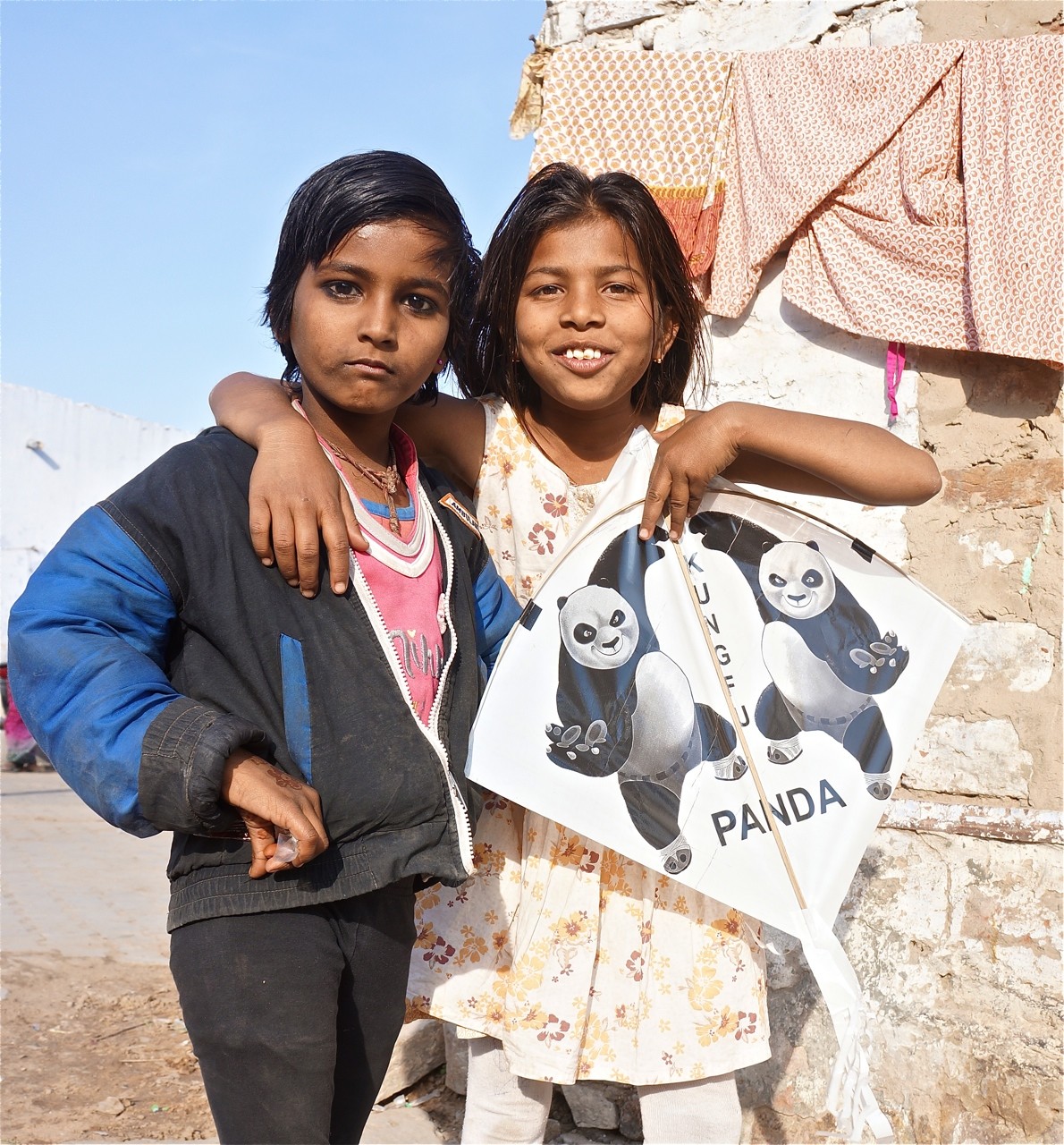 What they will tell you with certainty is that the kite festival is also a day of karmic giving. The local shops and restaurants donate money, which is spent to make sweet and savoury Pakoras (like tempura), which they give away throughout the day and in the days leading up to the festival. It is also a day to give 15 of the same gifts away to friends, family or strangers. It could be 15 chocolates to 15 children, just as long as it is fifteen (again no idea why) and it happens on that day.

To watch the kites flying is to wait for their falling. For that is the point. This is not a pretty demonstration of man’s skill versus nature’s thermals, it’s an act of playful warfare, where the objective is to cut a kite down, using every bit of skill and cunning in your arsenal. No doubt a few egos are cut down in the process too, usually by a grinning 5-year-old, if you are quick enough to trace the string to the operator.

Kite flying is an animated art form that seems to mimic others, combining the delicate hand movements of fly fishing with the flexible back bends and swoops of martial arts and the intense focus and craned necking of bird watching. 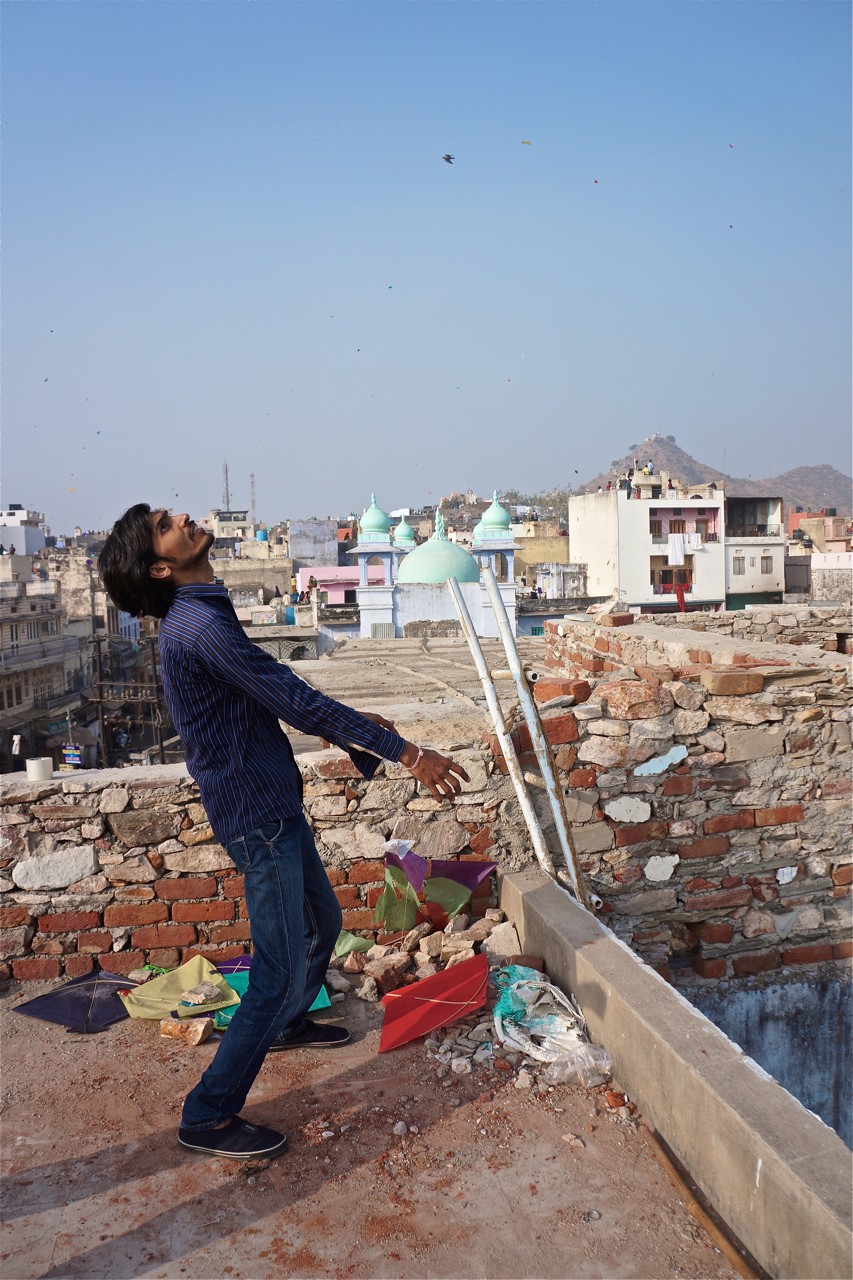 It’s not an easy task, getting these simple diamonds high in the sky and keeping them there. Five Rupees (the cost of a kite without string) doesn’t buy you a whole of aerodynamics or a user manual. Once again, a five year old comes in handy. It took me so long to get my kite up up and away and just a few short seconds to see it come down again, somewhere over the lake. Luckily my ego has taken quite a few knocks on the playing field, so I usually have low expectations, which I always surpassed. A useful strategy. 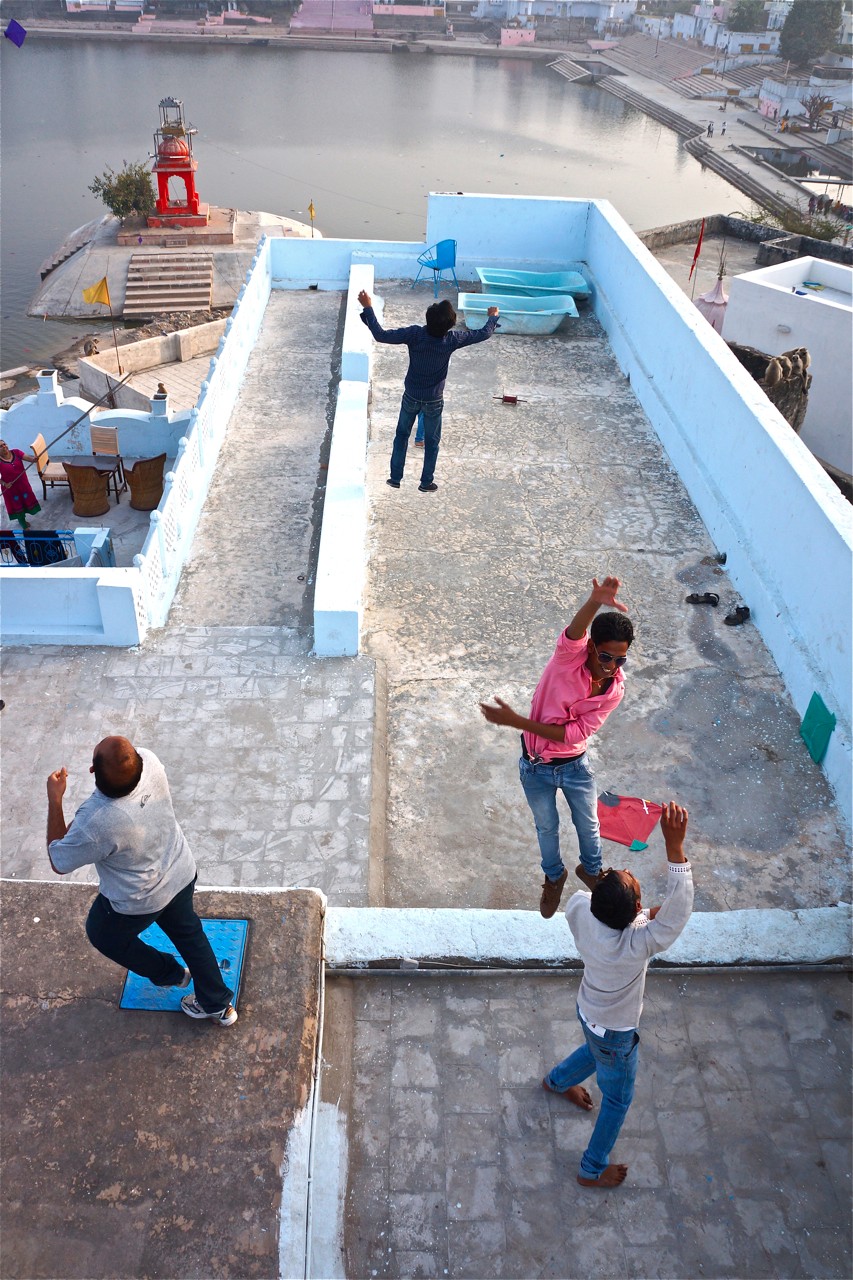 Flying isn’t the only attraction or skill required on the day. knows that not everyone can be a great batsman and bowler. Good fielders are needed too. That is why there is also a whole team of rooftop catchers, who run after the spiralling kites with long bamboo sticks, leaping and jumping in the hope of catching a falling kite – the spoils of war that everyone takes great pride in.

It’s an aerial view to behold – hundreds of people and monkeys in various forms of animation and jubilation running, jumping, laughing and eating on every rooftop as far as the eye can withstand in the glaring light of day. And all this set to the clashing soundtrack of whatever the rooftop owner feels like playing at whatever volume his speakers will allow. 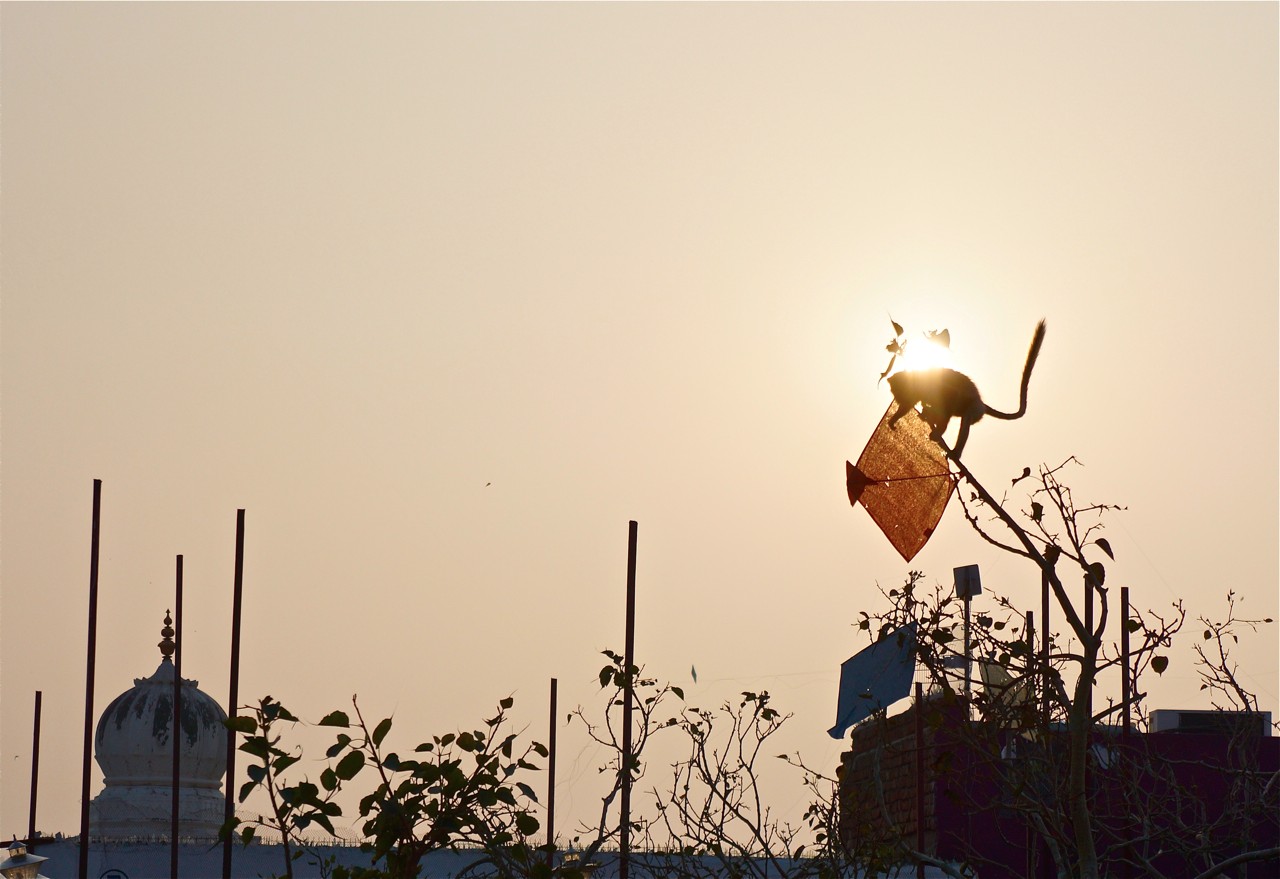 Because in India there is always a confusing clash of colours, sounds, old and new traditions, which you can enjoy for the magic and madness it is or spend your days trying to pack and repack into that small compartment in your left brain – logic. Good luck with that one. 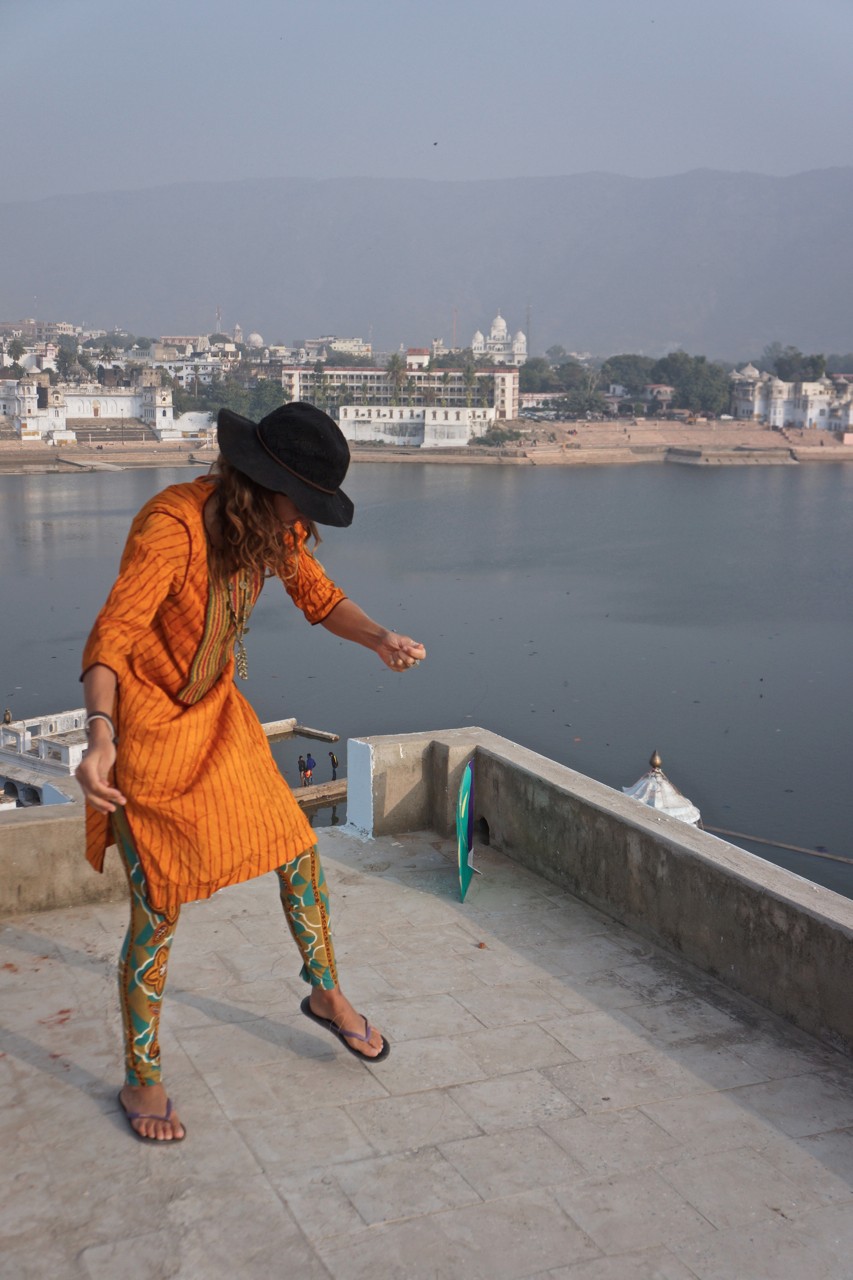 Musing on the colour within (and how to get the knots out of my kite string.)

Great piece, that gave us some answers to our questions. We observed kite filled trees in Udaipur and some roof top kite flying and were amazed how high the very simple kite soared into the air with only a slight breeze.

thanks judith. hope you are still enjoying the lovely lake city… happy travels