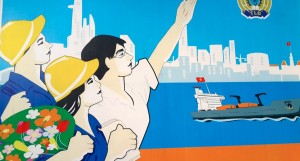 I am very flattered at the personal care you are giving to my friend’s birthday card on its trip to south african shores. I hope it has proved a good read by your many government minions and that it was not found to be critical of your coconut republic (I’m bored with bananas).

But the thing with these birthday’s is that they have this expiry date. Once the event is passed, a card received is a card quickly binned. And I am sure that, given your penchant (i know you still love those colonial French words as much as their pastries) for hard work and effort, you wouldn’t want it to be binned now would you? 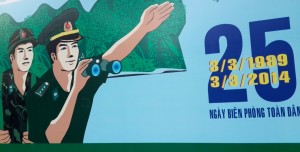 It strikes me that maybe I did not put the right message across. PR (by any other name is really PRopaganda) is an important national asset and one that should be PRotected at all costs. Believe me, my country knows what bad PR can do to for a nation’s image and morale, let alone its currency and attractivity to foreign investors. I believe my countrymen are getting to the point where we would rather be spun a good yarn than keep getting bad PR.  You might be able to help in this regard.

I am rather impressed with the daily messages that play over the city loudspeakers, especially the ones that are set to beautiful classical music (did you pick that up tip from the bollywood or hollywood channels on cable?). I don’t even know what these messages are saying but I still want to grab a sickle and harvest a rice paddy or pound that hammer into a  block of cement imported from your frenemy, China. Someone gave me a rough translation the other day. Something about the people being so lucky to live in this great nation and how they are the envy of so many. Probably true too. Your coffee is great, your Wifi free and accessible and your woman are pretty and, if all these maternity shops are anything to go by, as fertile as your lands. So all the basic human rights, if not happiness, are covered. Down with the hypocrisy of democracy! Up with rise of rice paddy propaganda! 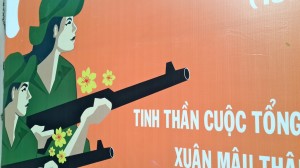 So back to that matter of the birthday card delay. As you can hear I am a big supporter of the national cause. Did you not see me buy a t-shirt with your national hero, Ho Chi Minh, emblazoned on the front? It wasn’t purely for design reasons let me tell you. Many’s a time I have nodded in agreement when locals have compared Mr Minh (can I call him that?) to South Africa’s very own national hero, Nelson Mandela. Same same. Except for that mass killing and oppression thing at some point. But maybe that’s pernickity. 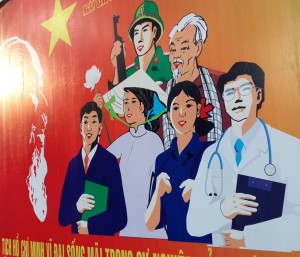 And on the matter of my taking photos of all your propaganda posters, it’s not for intelligence purposes, I can assure you. Our government departments don’t do digital efficiency just yet. Bar the ones that want money from you (SARS and the traffic department). I admire your posters. They communicate a clear message with colour and humour – a rare thing in government communications. Actually that’s not quite accurate. Some of our government messages are quite humorous but when you’ve heard the same punch line over and over again, you kind of want to punch your uncle Sam in the face. Know what I mean?

I think you get the idea, loud and communist speaker clear. So please deliver my message and I will deliver yours. Deal?

Viva Republique of Vietnam, Viva! You are the greatest country ever…So great that I am sure you are going to win the World Cup without your team entering the competition. But please, don’t lock up my witty subversive muse…She is just being the amazing and thoughtful friend she always is!!!