One in three Vietnamese men snore. How do i know this?

Four sleeper beds. Three vietnamese men. One open throat vocalist. A tenor, as far as I can tell.

Except who wants to listen to acapella opera when you are sick, tired and just splashed out $45 for a cushy (SE asia relative) soft sleeper cabin. It was quite cushy actually. The bed was of a decent western length; the pillows even keeled. We even got a few bags of snacks and a brown paperbag filled with a toothbrush, toothpaste and water combo. I was the only person who opened these. suspect. 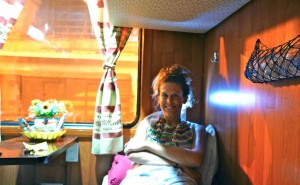 The $45 fanxipan sleeper train to Sapa

Public private spaces are an interesting study. The Vietnamese are a gentle and polite people but the rules of etiquette are still different. And some I don’t get.Ii have had a sneaky boob fondle by a giggling woman, who  obviously wanted to know what western breasts felt like. Lumpy or smooth? Mango or mangosteen? It was wierd, if not a bit uncomfortable since she was working at the place I was staying for the next 10 days. Across the road, a similar experience. I got quite friendly with the owner of the restaurant…a nice pretty woman that I would go to for my water and most lunches. she had a cute toddler, who was still not walking at 2-years old, who I would play with while she and I “‘chatted” about food and the weather. I even helped her write the menu on her blackboard. I guess we were friends in that deep way that makes you spend money at her shop and not her neighbours. So I was taken aback one night when I cycled to her shop to buy some water. It was late, I was tired. I just wanted the water and not a chat so it took me a few seconds to register what she was saying when she pointed to me and said “You, very small” in a disapproving way. Huh? Again the same, making it very clear by pointing to her own breasts what she meant. Weird  but also annoying. I know she didn’t mean any harm by it but I also wondered how her culture didn’t find that rude commenting on someone else’s private(eish)parts. Maybe our flaunting of them often don’t seem private but still.  The timing was inappropriate too. I just wanted to exchange money, not receive comments on my supposedly inadequate anatomy. My patronage took a downturn for a few days after that. 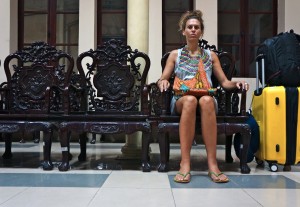 The sales through anatomy combo continued in the local markets where I was chased, on more than one occasion, by local women holding up strings of dental floss. Or at least that’s what they look like when you are trying not to make eye contact with your hunter. Stop and it’s a stampede by dental floss, which you suddenly recognise as thread that is used to pluck your brows and any other hair up or down there. I have had my eyebrows threaded and shredded in India and, while not painful if they have the skills to move very quickly across your brow, you can end up with a curious expression for the rest of your trip. Depending how quickly your hair grows back. I’m still waiting to look amused. The ladies eventually caught up with me. One of them thought it a good sales technique to point and grimace at my white facial hairs before moving on to my legs, which she actually pulled at by way of a demonstration. Remember I am standing in a public market in broad daylight. It’s not some dark back alley. So I did what any aggravated animal would do… i prodded and pinched back in a way I hoped would say what she didn’t pick up from my annoyed facial expressions earlier: “back off b**ch”

Spitting in public is another one I don’t get. It’s not as bad as nepal and india, where they actually have signs that say “no spitting” but still, do we have to share and stare at your phlegm now as we share a common food area? I have seen grizzle being spat to the floor with equal equanimity.

What is more interesting is how westerners negotiate their way through the public private debate. Some accept it, others are visibly disgusted, and probably all of us pass judgments in some form or another, if only to reaffirm or question our own values and cultural norms.

And then there is the one great western fail. the smoking laws, or lack of them. All (I am going to go out on a limb here) smoking westerners take full advantage of the fact that they can smoke anywhere at anytime. They don’t have to go outside or wait for someone to finish their meal. It’s all legal and permissible. Everyone is doing it. And yet how many of them would light up at the dinner table at home? How many would consider themselves courteous and considerate smokers in their own communities and households? Why should that change with the laws? Should our values/morals/politeness take a holiday when we do? I think we need to be negotiating more than just the price of fruit, before we can put a price to our values and culture.  $1 is a bit cheap don’t you think? 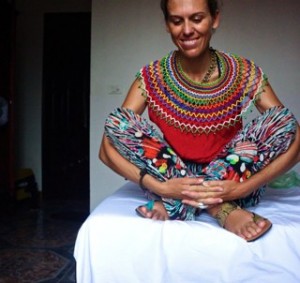 (PS. It must be the SAPA mountain air that makes me take the moral high ground. No doubt the next blog will be more grounded)