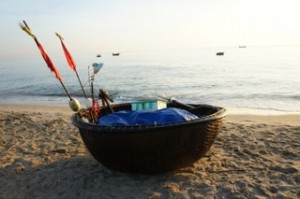 There’s nothing quite so satisfying as snatching a few hours of the day from your fellow travellers and locals. Getting up before the dawn cracks open like an egg, spilling its golden goodness into the sea is a special moment, usually rewarded with unspoilt sand and the sound of waves whispering their morning mantra to the land’s keeping.

But in Vietnam the sun rises at 5.20 and the locals even before that. So when I mounted the final sand dune this morning, hoping to claim my winners prize, my bleary eyes refused to confirm what my ears had long been hearing – throngs of people in various stages of animated activity. The joggers, the swimmers, the soccer players, the crab hunters, the old women cemented in cold sand keeping watch over their children and grandchildren. It’s a colourful scene with an equally colourful sporty soundtrack overlaid with yelps of excitement and laughter, usually led by the kids in their bright lifejackets. Every small scene is recognisable in actions if not understandable in words.

By 6.30am it’s all over. The beach abandoned to the sun worshipers and holidaymakers. The locals know to avoid the sun, which moves from red to yellow to white light faster than a traffic light change, which in these parts is either 18 or 26 seconds. I know because they actually have a countdown clock on their traffic lights, which has made for many a new year’s countdown “3, 2, 1” as I cycle by with few seconds to spare me from becoming a statistical inevitability. So if you miss the early edition, the good news is that the omnibus takes place every evening between 5.30-7pm, with more floating toys and mobile food stalls to offer enough variety for those who take in the double bill.

pic: an bang beach, hoi an