It all started with an aisle seat on a local bus. In Laos, that means you get to sit on a plastic stool in the middle of the aisle. Literally. 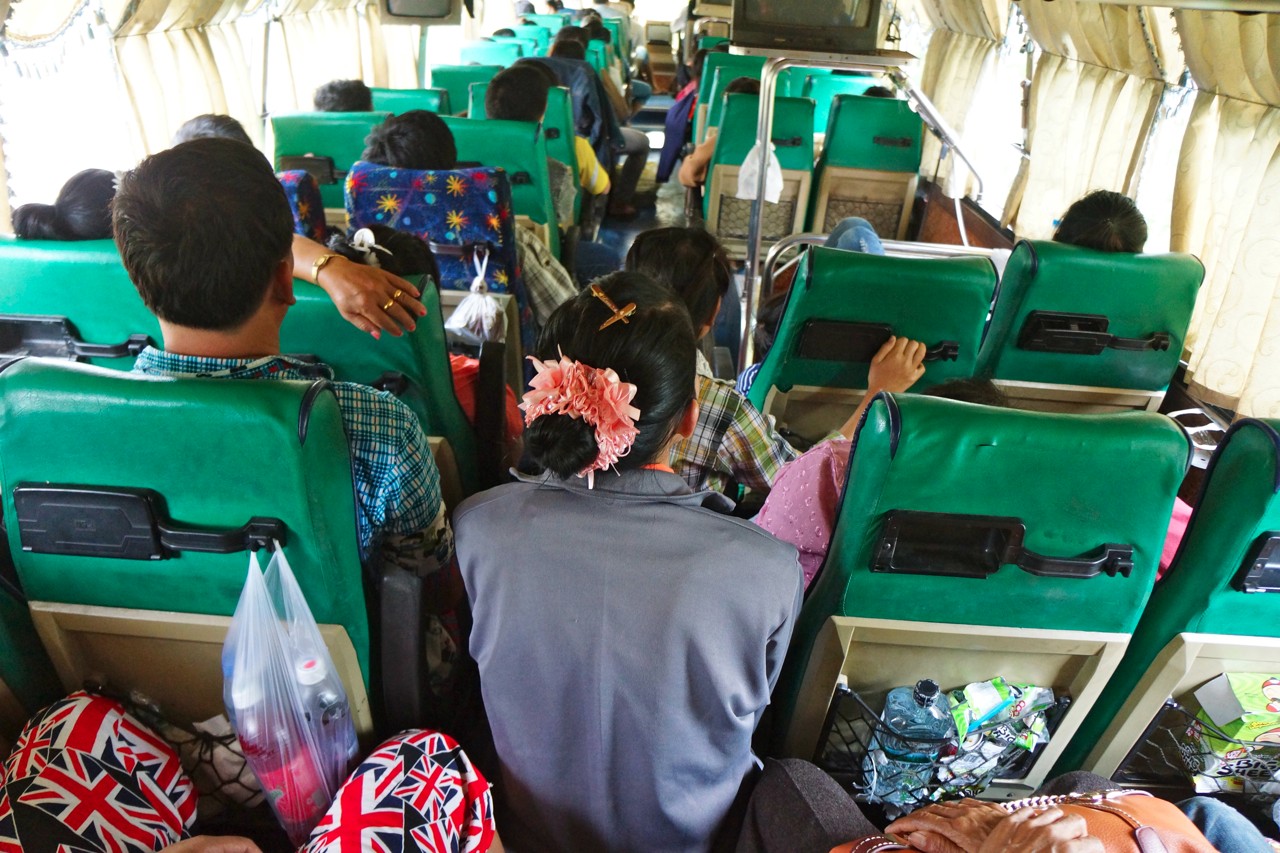 PIC: when in Loas, don’t ask for the aisle seat

It’s not so much a seat allocation as a capacity for maladministration.

Bus tickets might feel like a gamble but you never win the Lottery. Your number never comes up because there aint no numbers. If the bus fills up before the music stops and you can’t grab a chair, tough luck. You’ve just won yourself 100km plus plus on the naughty chair, where you get to look up to the smart adults and down on the sacks of meal and any excess baggage that share your fate.

So there I was, the last person on the bus, bemoaning my destiny. I should have realised that a double decker bus doesn’t equal double seating capacity. The local buses carry as much cargo as they do people. This bus was a case in point. The bottom deck had been gutted for seats to make room for the usual piles of food sacks and, on this occasion, even a motorbike.

I was trying to get from Thakhek, in central Laos, to Kong Lor, a limestone cave in a rice paddy region about 3.5hrs away.  Give or take a few hours and bus changes. I had quickly learnt not to take the time to distance ratio personally in Laos. 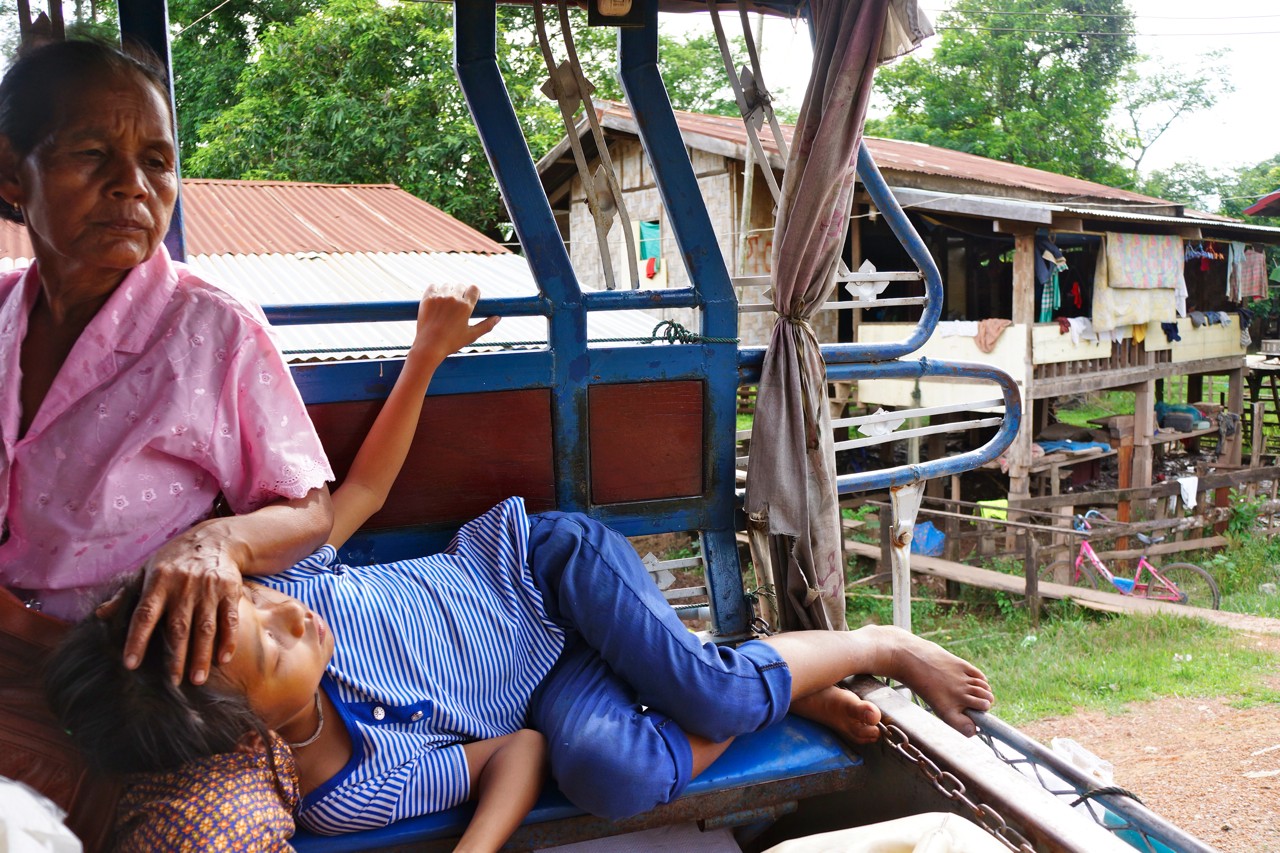 A 100km distance takes as long as it takes for the minibus to trawl along, hooting for passengers to fill its seats, and then some. Which is one of the reasons they only drive at 50-60km per hour. The other is the roads, which are mostly tarred  and quite even keeled, bar a few potholes and monsoon downgrades.

But distance is not the only thing that governs time. When the clock strikes 12pm, you can bet the minibus driver is looking for a town to call his 20 minute lunch stop, even if you just left Thakhek at 11.20. oh yes. that was me.

So patience is not a virtue but a necessity that will keep you sane in Laos, which explains while I was feeling a bit mad when I looked down at my plastic stool in the aisle.

I guess my face showed what my body was dreading, which is why some kind local got up and offered me his seat. Of course I refused it and was suddenly all good manners and smiles. He insisted and I relented (very gladly), and so I spent the next two hours spread comfortably between a snoring man and another younger man napping behind his face mask at the back row. With a travelling monk thrown in, two seats down, for good measure. 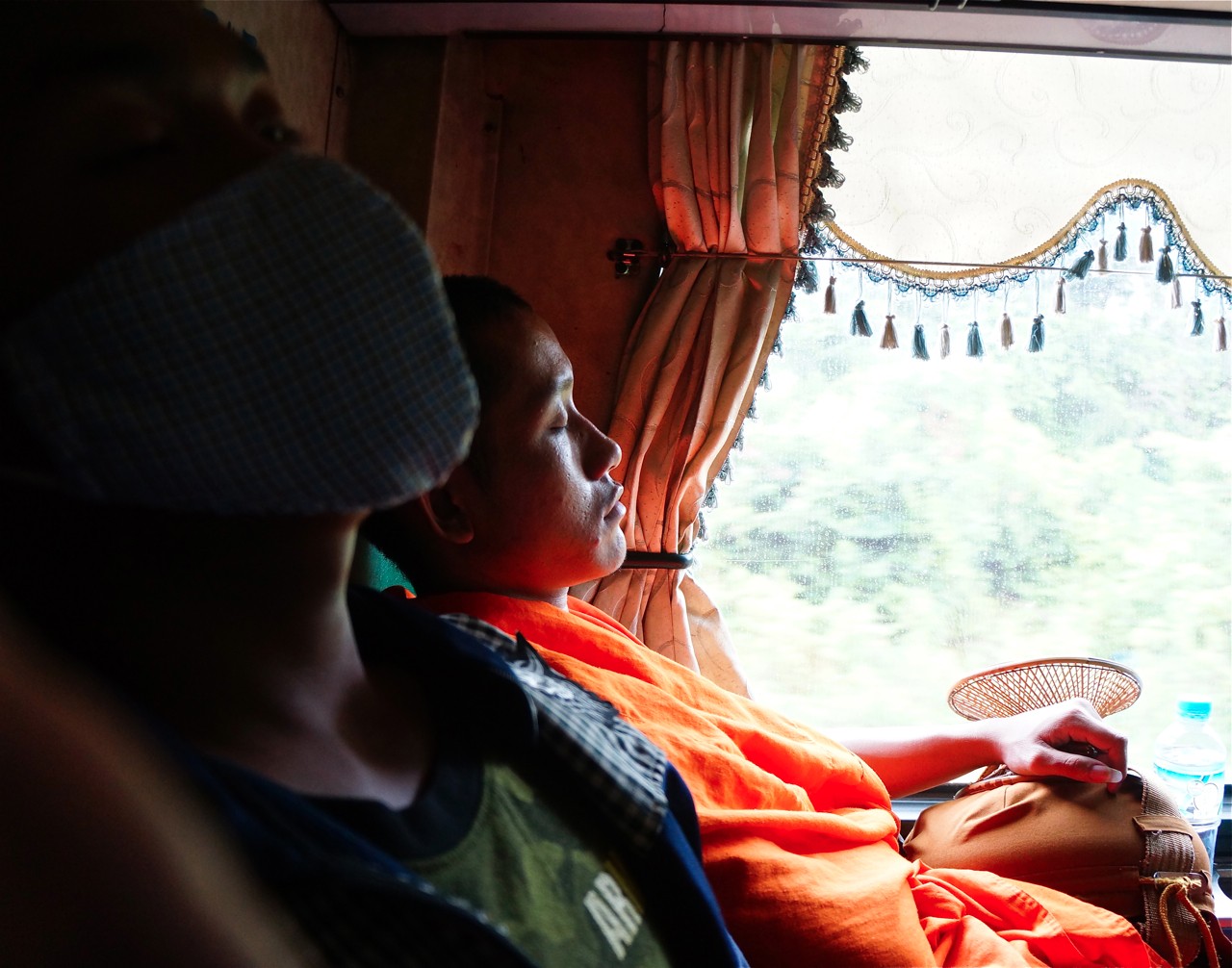 Over the next 2 hrs, the aisle kept on filling up with people and produce... and later an overwhelming smell of cabbage. Were my neighbours bowels relaxing along with their bodies I wondered? Or worse, was it me? Were my once curried pits in India becoming cabbage pits in Laos? 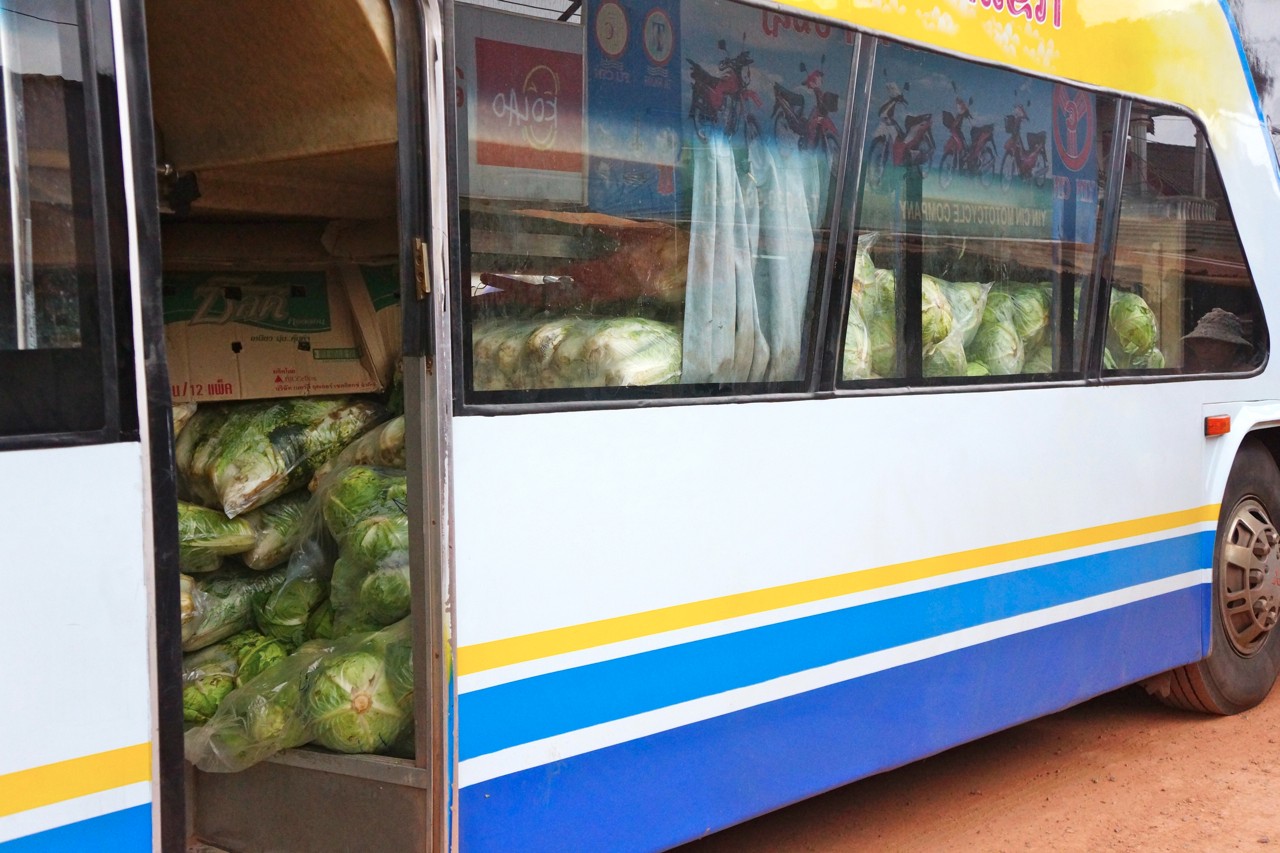 PIC: That moment when you realise that the bottom deck of the bus is filled with cabbages.

These thoughts distracted me until I started to wonder about my exit point. It had been over two hours. I should have reached the junction already. Does the ticket guy remember that I need to get off at the junction? It was time to annoy my fellow passengers with a furrowed brow and regular calls of”Vieng Kaum? Vieng Kaum?” If you do this with enough regularity and a good high pitch, you can bet people will want to help you get off the bus. it worked. 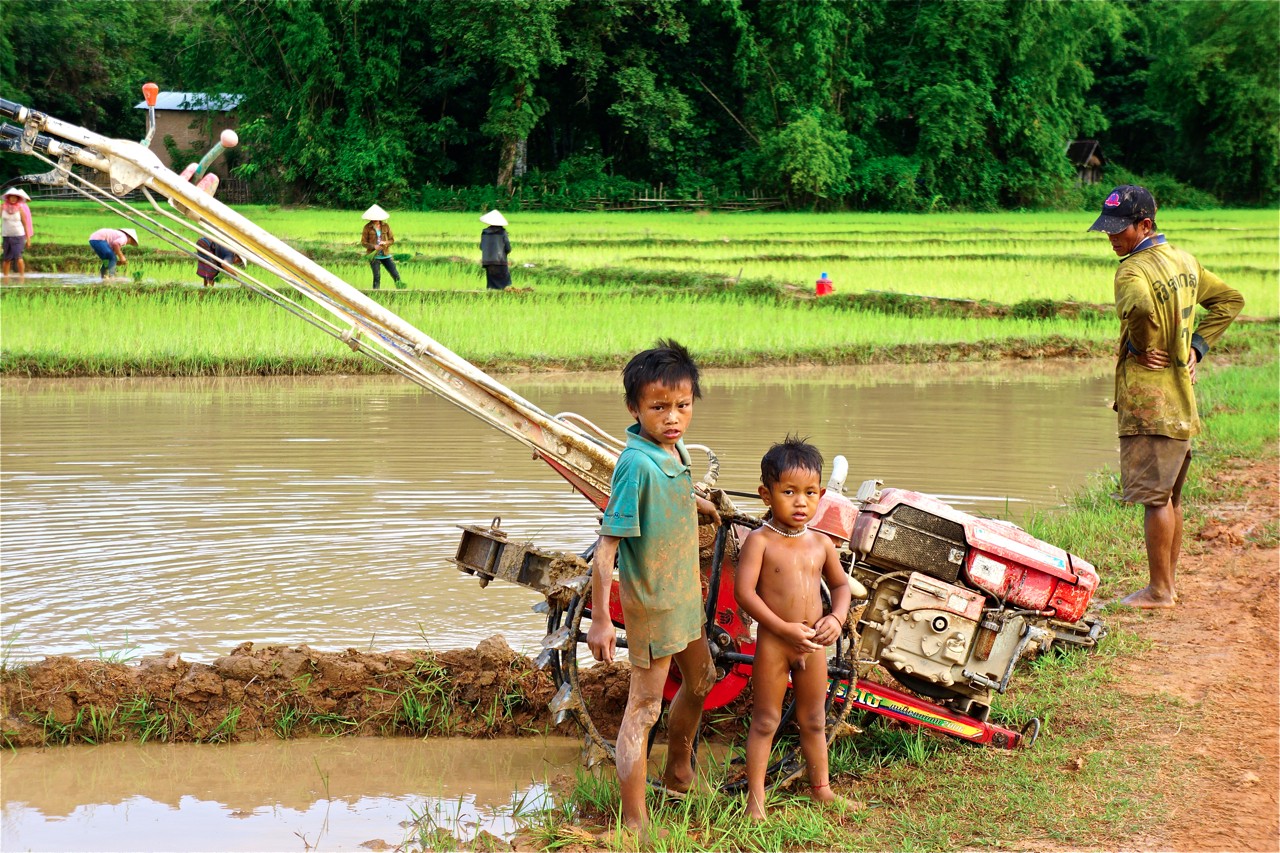 So 2hrs and 1 bus ride down, i needed to locate a sǎwngthǎew (a tuk tuk van with  hard benches at the back) going to Kong Lor.

The sǎwngthǎew (say: song tow) ride was fun, in that kind of perverse traveller adventure way. The thinly cushioned benches were hard, the road  windy and punctured with years of too many vehicles leaning on it for suspension and support. But the scenery is amazing, lush and green, with sections of jagged limestone outcrops keeping watch over luminous green rice paddies. 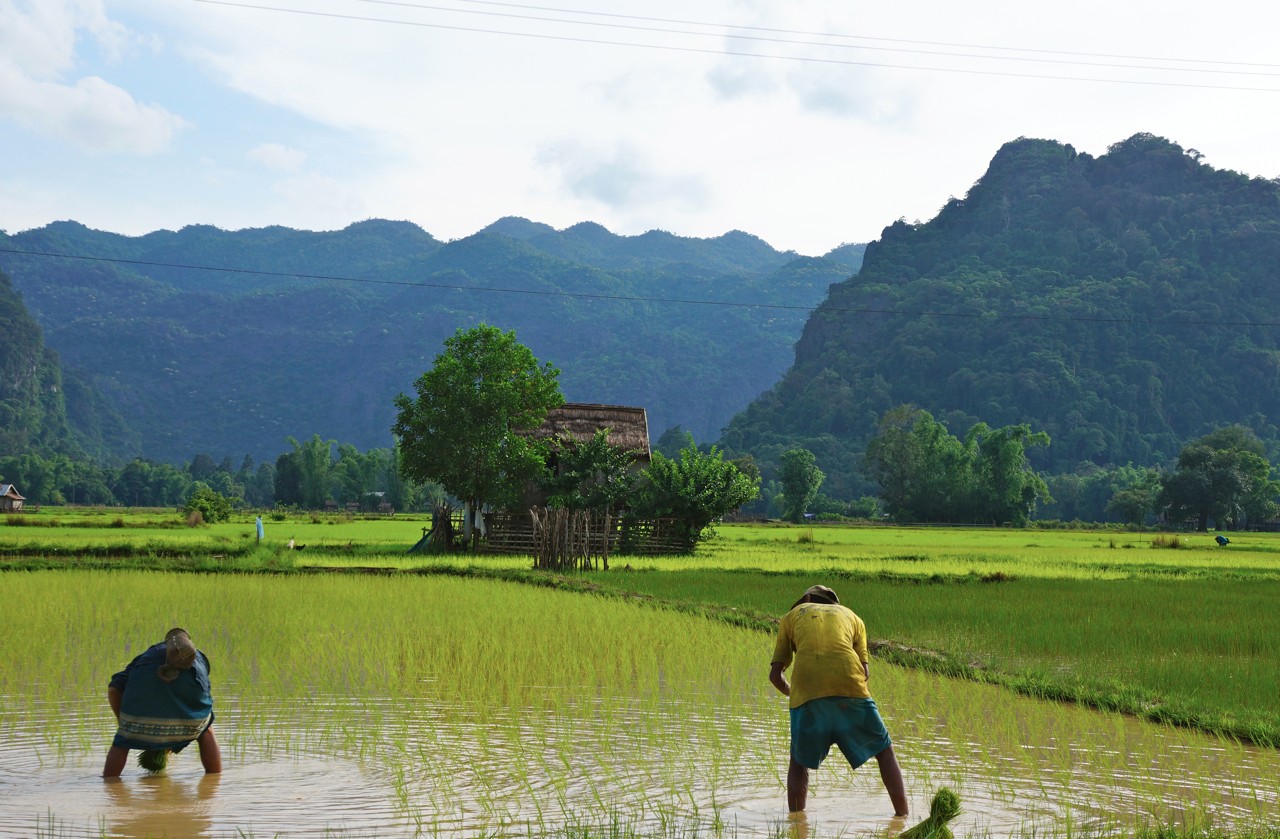 Which means you don’t mind reading the brailled roads with your bum because the story is so riveting.

I got to sit at the rear, legs and camera dangling out the back, as I watched this scene of beauty pass by me at a slow shutter speed. I was equally mesmerised by the ticket woman who was riding on the back grill, one arm holding onto the top bar, the other one on standby to answer her cellphone. and so she swayed along around every corner and  through every pothole and rickety bridge. Pure skill. 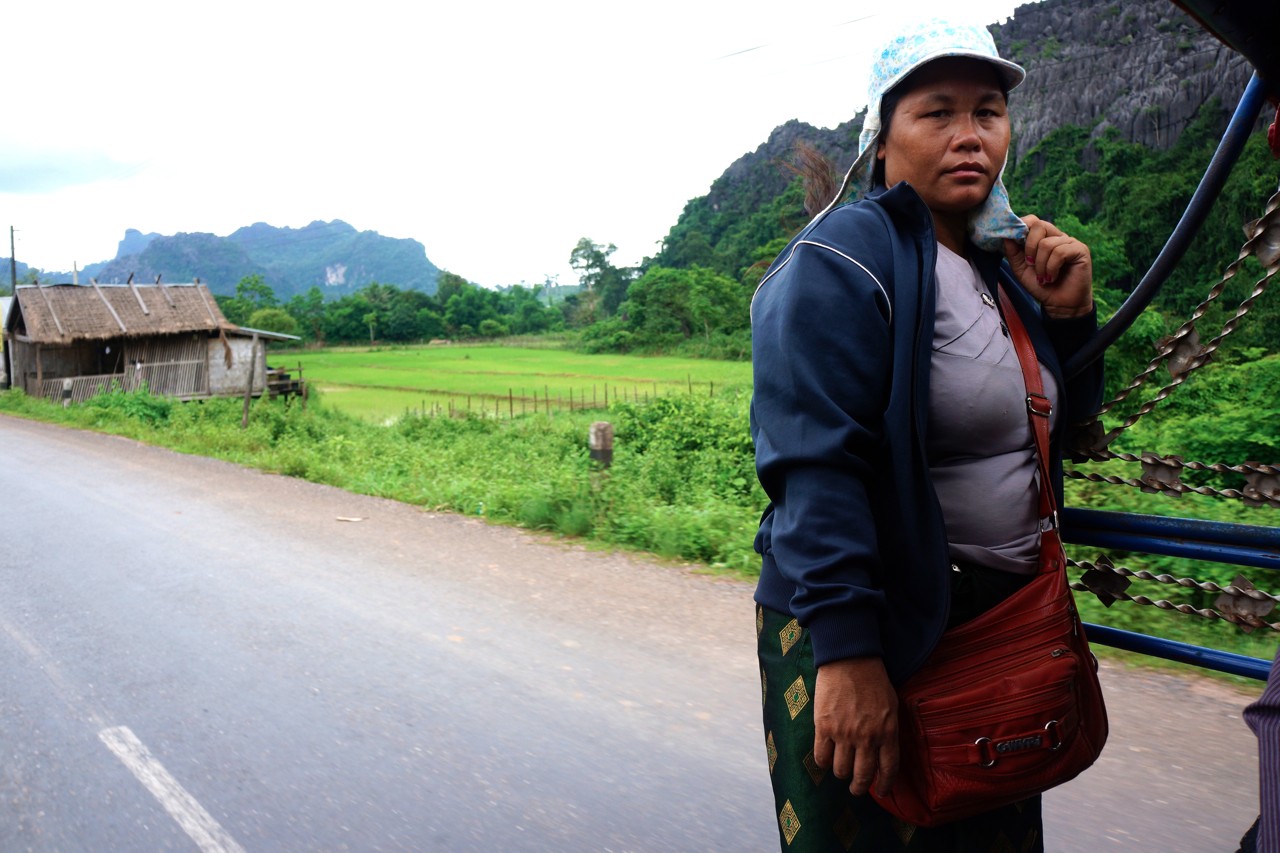 But even the best adventures must come to an end. And mine never seemed to. So when we reached the next town and were bundled out, I was reaching that point of downgrading my adventure adventure to just another hard travel day, which will  get filed along with grey images of rain skies and bumpy roads and overcrowded  buses.  I certainly won’t remember the potholes being filled up with red earth water, like giant  pots of Thai red curry.

Now 5 hours into the  trip and with not enough fuel to keep me chipper, I wasn’t all that excited for the 30 minute rest stop and yet  another tuk tuk truck to fill up and empty out along the final stretch. The vita milk (soya milk drink) helped, a little, but didn’t prepare me for the fact that we were now becoming the local village delivery truck. oh yes.

On any other day I would have loved the fact the driver and general strong arm makes detours to pick up asbestos roofs (which he also rolls up and lugs onto the roof). i would have cheered him on as he backtracked to the petrol station to fill three petrol containers (which he then  also attaches very precariously to the back of the tuk tuk).

But not today. And especially not when this means more deviations off the “main road” to villages where we now unload all of these things, on top of the meal sacks and bags and and and.

You get me? There’s just something about a three hour day trip which turns into a 7-hour epic that just about sucks all the marrow from my humanitarian bones. 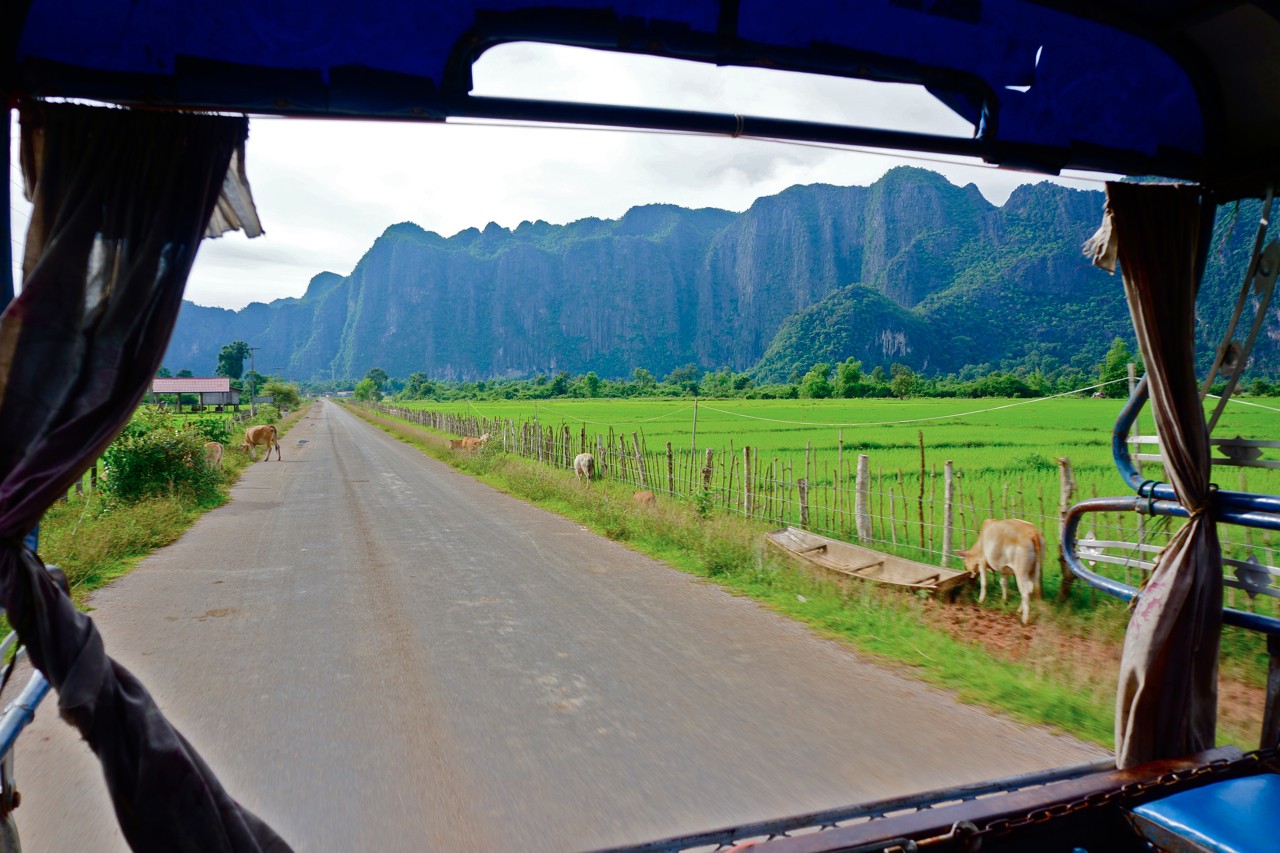 At least the last leg ended with the most amazing afternoon light shining down on those green rice paddies that my camera loves so much. And I definitely had the time to enjoy it.

Laos is definitely hard work… but also beautiful. must be a woman then (hee hee).

Musing on… a hard bench and an easy life 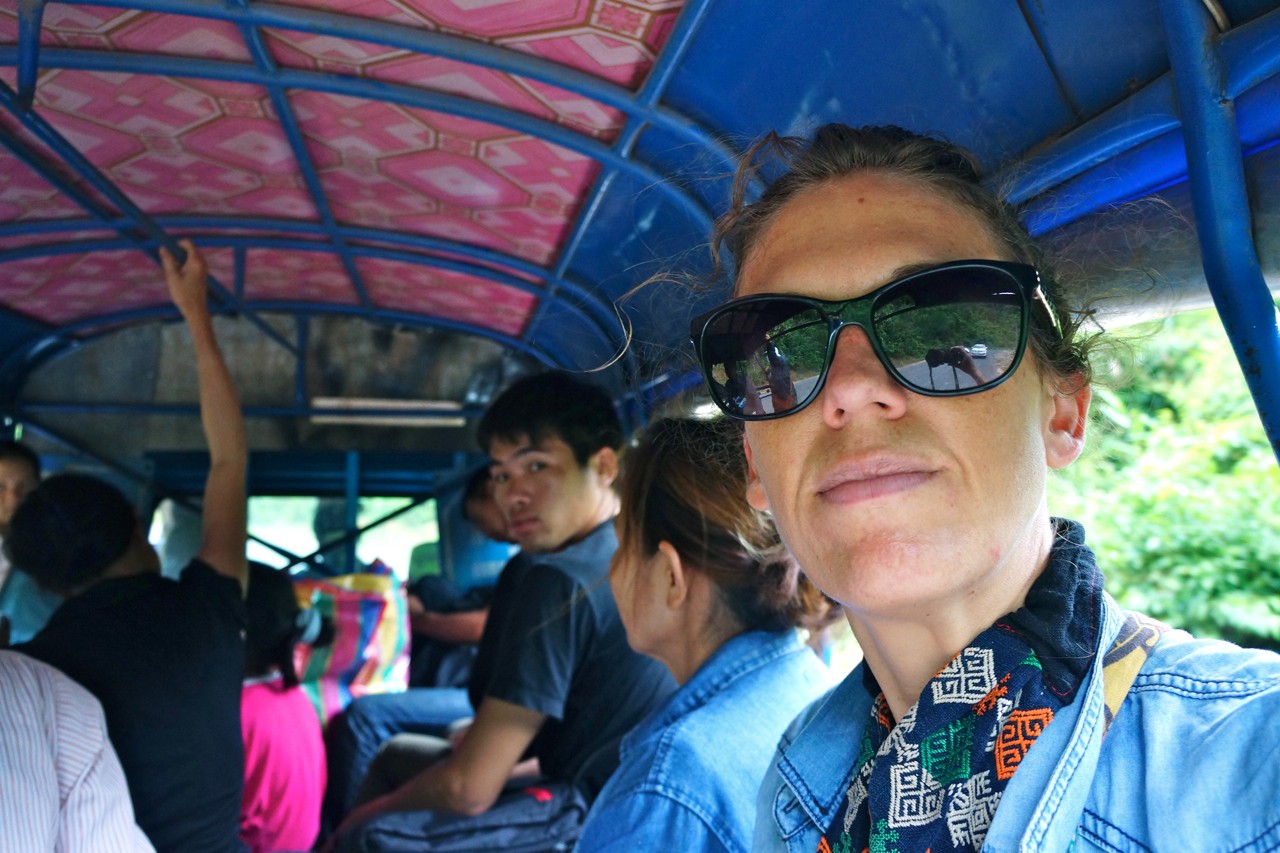